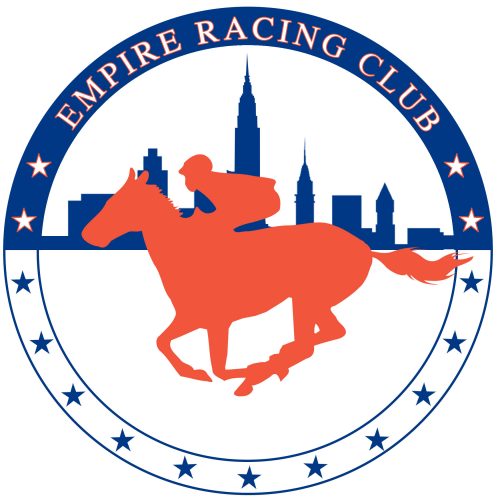 The Empire Racing Club, which this year launched its third season, is an initiative created by the New York Thoroughbred Horsemen’s Association to let you experience the thrills of racehorse ownership at minimal cost and no risk. New York’s legendary retired racecaller Tom Durkin has served as managing partner since the Club launched in 2019. 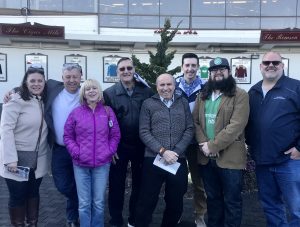 Owning a racehorse can cost more than $50,000 a year, with no guarantee that your horse will ever make it to the starting gate.  Membership in the Empire Racing Club gives you behind-the-scenes access and all the excitement at a fraction of that price. Since our launch in 2019, our members have had the opportunity to visit the backstretch, leaning on the rail while rubbing elbows with New  York racing’s luminaries as their horse went through its morning training. They have met as a group with our trainers and jockeys in the paddock of Aqueduct, Belmont and Saratoga, traveled on their own to Gulfstream and Woodbine, and even the 2019 Breeders’ Cup!  The Empire  Racing Club allows you to get a close-up look at the competition from the sidelines, rather than the stands. And, with racing luck, you will cheer your horse to victory and pose for a photo in the winner’s circle at one of NYRA’s beautiful racetracks!

Proceeds from the Empire Racing Club, a not-for-profit tax-exempt social club, will be used to pay the expenses of the horse and the Club. Any excess funds will be distributed to a 501 (c) (3) non-profit aftercare organization. The Club membership agreement specifically names New York’s TAKE THE LEAD Thoroughbred Retirement Program as the designee.

Club members receive regular updates about their horse via Zoom calls, email and social media, and (Covid-19 protocols permitting) will meet with other members at dedicated Club events and race days. You will also learn about the Thoroughbred industry from the experts. Some highlights from past events:

The COVID-19 pandemic did not prevent us from keeping our members informed and connected.  A major benefit of ERC membership is the ERC Educational Series, regular Zoom meetings for members featuring many of the industry’s leading professionals from all aspects of the sport. Topics covered during the first two seasons of the ERC included breeding, sales, racing partnerships and syndicates, the claiming game, equine health and veterinary care, Thoroughbred retirement, and handicapping. The roster of guests who have been featured in the series represent the who’s who of racing.

*The cost for membership is $475 for the term, with no further outlay by the participants (providing members with the racing and horse ownership experience without the pitfalls and costs often associated with the business).

As a perk, the Club has partnered with NYRA Bets, which will offer a special promotion to members who sign up as new NYRA Bets account holders. 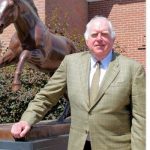 Tom Durkin was the voice of New York racing from Aug. 29, 1990 through Aug. 31, 2014. During a career over a span of 43 years, he called approximately 80,000 races. He was the voice of the Breeders’ Cup for its first 23 years.  He also worked as an analyst, feature producer and commentator for over 20 years for both ESPN and NBC. In New York, he served on the board of the Backstretch Employee Service Team for 18 years. He is currently a Board member emeritus of that organization. He is the winner of numerous industry awards including the Eclipse Award of Merit, The Jockey Club Gold Medal, Big Sport of Turfdom, Thoroughbred Club of America Honoree, Saratoga Race Course Walk of Fame and ThoroFan Man Of The Year, among other awards. He is currently a resident of Saratoga Springs, New York.

Christina, a writer and editor for the Thoroughbred Daily News for over 18 years, has traveled all over the world to cover the sport’s most prestigious events. A racing enthusiast from a young age, the native of Montreal parlayed this knowledge into a successful media career which has spanned two decades. She served as an on-air host/handicapper of Gulfstream Park’s Championship Meet for three years, and joined as a regular guest commentator on the national horseracing network HRTV. Her on-air work also includes stints as a member of TVG and XBTV’s East Coast roster of talent. For three years, she led hospitality services as Director of TOBA’s Owners Concierge, and in 2019, Christina co-authored Sermon on the Mount, the only authorized account of the life and experiences of Hall of Fame trainer D. Wayne Lukas.

Born in Indianapolis, Indiana, Mark Casse grew up in Ocala, Florida. Mentored by his father, renowned horseman Norman Casse, Mark won his first race at Keeneland in 1979. He captured his first training title at the Churchill Downs Spring Meet in 1988, and also has won titles at Keeneland and Turfway. After serving stints as a private trainer to Calumet Farm and Mockingbird Farm, Casse joined forces with Eugene Melnyk and subsequently moved his operation to Woodbine Racetrack in Ontario, Canada in 1998. Since then, he has earned the leading trainer title at Woodbine 11 times, won 11 Sovereign Awards as the outstanding trainer and was inducted into the Canadian Horse Racing Hall of Fame in 2016. Among his most notable horses are American champion turf mare and Royal Ascot winner Tepin; Canadian Horse of the Year Sealy Hill (2007); Canadian Classic winner and Horse of the Year Lexie Lou (2014); Breeders’ Cup winner and Canadian Horse of the Year Catch A Glimpse (2015) and Canadian juvenile champion filly Wonder Gadot, winner of the first two legs of Canada’s Triple crown in 2018. In 2019, he won his first American Classic with War of Will in the Preakness Stakes before taking the Belmont Stakes with Sir Winston later in the season. Mark Casse trains Empire Racing Club equine partner, Proven Strategies. 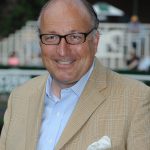 Christophe Clement is the son of trainer Miguel Clement, and worked for the prestigious Luca Cumani, Alec Head and Shug McGaughey stables before going out on his own in 1991. A native of France, he has been one of the leading trainers in United States for over 25 years. Clement has won more than 2,000 races, including over 200 graded stakes, and guided the careers of three-time Eclipse winner Gio Ponti and 2014 GI Belmont Stakes hero Tonalist. Cumulative purse money earned by the Clement Racing Stable now exceeds $133 million. As a public trainer, Clement has acquired a reputation for meticulous attention to details. He takes pride in the horses under his care and personally trains each of them. He intentionally limits the size of his stable to a number that can be kept in just two locations at any point in time. He is also very fortunate to have a great team around him from all corners of the world, including Christophe Lorieul, his assistant since 1993. Clement was a 2020 nominee to racing’s Hall of Fame. Christophe Clement trains Empire Racing Club equine partner, Community Adjusted. 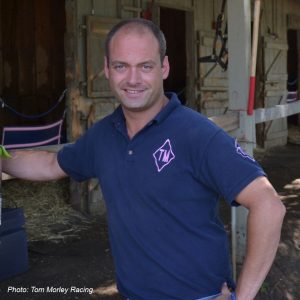 In 2001, at the age of 18, Tom Morley graduated from the Darley Flying Start program, a management trainee course sponsored by HH Sheik Mohammed Bin Rashid Al Maktoum, before joining Jeremy Noseda at Shalfleet Stables in Newmarket for 4 years as an assistant trainer. In 2010, U.K. native joined trainer Eddie Kenneally, initially working at Gulfstream Park in Florida followed by Kentucky-based tracks Keeneland and Churchill Downs before helping Kenneally open and develop his New York operation. With a decade of experience as an apprentice, Morley took a leap of faith and established Tom Morley Racing in March 2013. Since then, Morley has started over 1,500 racehorses and amassed over $9.7 million in purse earnings. Over the summer of 2016, he won his first and second graded stakes at Saratoga Racecourse–one of the most prestigious racetracks and racing meets in the world–with Haveyougoneaway, the 5-year-old chestnut mare who won the 2016 GII Honorable Miss and GI Ballerina. He later added a win in the 2018 GI Secretariat S. winner Carrick. Morley is married to lifelong horsewoman and longtime NYRA paddock analyst Maggie Wolfendale. 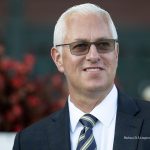 Todd Pletcher, one of the most successful horsemen in racing history, was the first to train one of the Empire Racing Club runners. Born in Texas in 1967, Pletcher learned the horse business from his father Jake Pletcher and later apprenticed under Hall of Fame legend D. Wayne Lukas. He saddled his first winner in 1996 and quickly established himself as one of the stars of the game. In 1998, the Dallas native earned the first of 13 (to date) training titles at Saratoga; in 1999, he garnered the first of his 13 Belmont titles during the Spring Meet. He notched the first of a record seven Eclipse Awards in 2004, when his stable stars included Breeders’ Cup winners and champions Ashado and Speightstown. Fittingly, his first winner of a Triple Crown race came in 2007 when the filly Rags to Riches outfought Curling to win the Belmont Stakes. He has since saddled two additional winners of the Belmont, with Palace Malice taking the “Test of the Champion” in 2013 and Tapwrit winning in 2017. Pletcher’s first Kentucky Derby triumph came courtesy of Super Saver, and he added another win in the “Run for the Roses” in 2017 with Always Dreaming. Those are just some of the highlights in a career that has already seen him win over 4,800 races. His runners have amassed more than $388 million to date, and they finish in the top three—“in the money”—52 percent of the time. He resides in nearby Garden City. Todd Pletcher trained retired Empire Racing Club equine partner, Starlight Daydream. 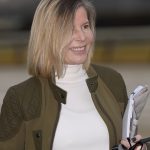 Linda Rice not only the leading female trainer in the nation, but is one of the top trainers on the very competitive NYRA circuit. The third-generation horsewoman has won training titles at all three New York tracks, including becoming the first woman to win the Saratoga title. Rice has conditioned the likes of champion La Verdad, MGISW Palace, who she claimed for just $20,000, and Grade I winners Voodoo Song, City Zip, Princess Violet, Things Change and Tenski. She recorded her 2000th career victory with Scilly Cay in the Rego Park S. in January, 2020 and won her 200th stakes race with Max Player in the GIII Withers S. Born in Wisconsin and raised in Pennsylvania, Rice is the daughter of legendary horseman Clyde Rice, who is one of the original pinhookers and was known for having an exceptional eye for a horse. Clyde grew up alongside trainer D. Wayne Lukas and purchased and broke several of the Hall of Famer’s top runners, many of whom Linda galloped for her father. After spending her life galloping and assistant her father, Rice took out her license in 1987 and started with a small string at Monmouth Park before moving to New York full time about 25 years ago. She is a member of the NYTHA Board of Directors and chair of the NYTHA Scholarship Committee. Linda Rice trained retired Empire Racing Club horse, Now and Again and currently trains our equine partner, Did It My Way.

OUR CURRENT CLUB HORSES (Click on the photos for more information): 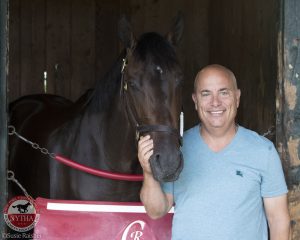 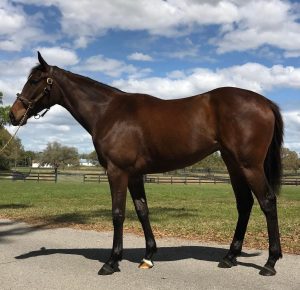 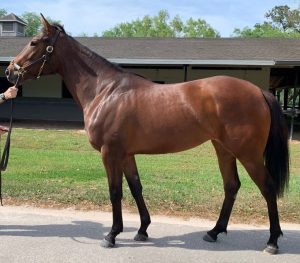 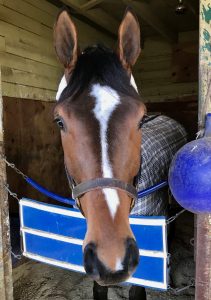 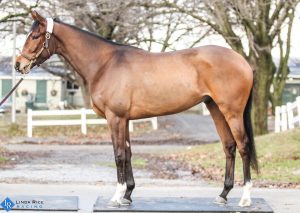 Did It My Way 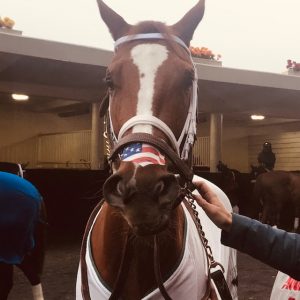 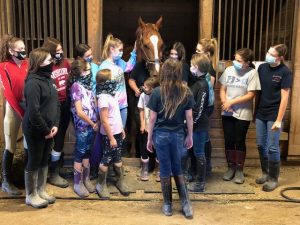 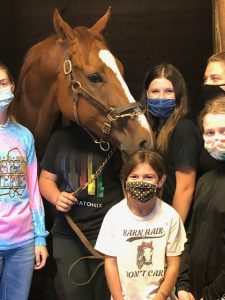 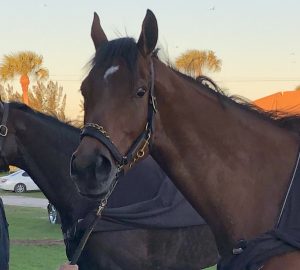 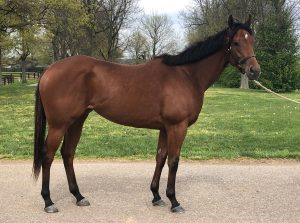