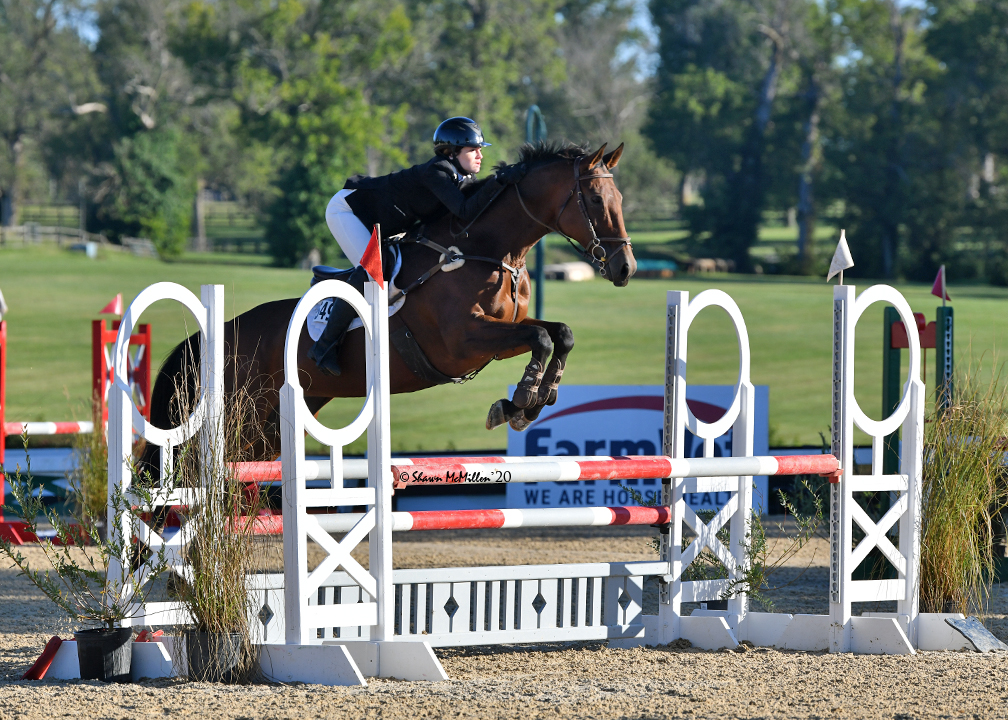 Satins Angel is the hero of a cautionary tale. She fell through the cracks after leaving the racetrack, but overcame the odds with the help of owner/rider Alexa Lee to become a champion show jumper. Last Sunday, she added to her growing list of accomplishments with an eye-catching win in the Jumper division of the $20,000 TAKE2 Hunter/Jumper Finals at the Kentucky National Horse Show in Lexington. Kathryn Currey’s A Lil Evil was second, with Cleanth Toledano’s No Nonsense Jones finishing third.

Despite the challenges and travel restrictions resulting from COVID-19, 31 competitors from 14 different states converged on the Kentucky Horse Park for the TAKE2 Finals. Satins Angel beat all comers. The handy mare took a nearly impossible inside line that shaved a few seconds off her time in the jump-off to seal the victory; it mirrored the dramatic turn her life has taken since she was found at the Sugarcreek Auction in Ohio four years ago.

“She suffered such abuse, but she still tries so hard to please,” Alexa said. “When I asked her to make that inside turn, she said, ‘You’re crazy, but I’ll do it for you.’ And she did. If I could, I would give her my heart. I know that’s so corny, but she means everything to me.”

Bred in Louisiana, Satins Angel raced with some small success as Queen Satin. She won three times and ended her racing career in 2013 at little known Mt. Pleasant Meadows in Michigan. That’s when things started to go wrong for her.

“She stopped racing because she was a bleeder, and when she left the track she was passed around and was nearly sold for slaughter,” Alexa said, a catch in her voice. “She was beaten so badly she still has the scars on her face. It was awful.”

But luck was with Satins Angel, who was rescued from the Sugarcreek Auction and sent to the barn where she would finally cross paths with Alexa. The connection was instantaneous. Before long, Satin belonged to Alexa and the two were on the road to show jumping glory. Their success took time and hard work and something else that Alexa learned from her equine soul mate. 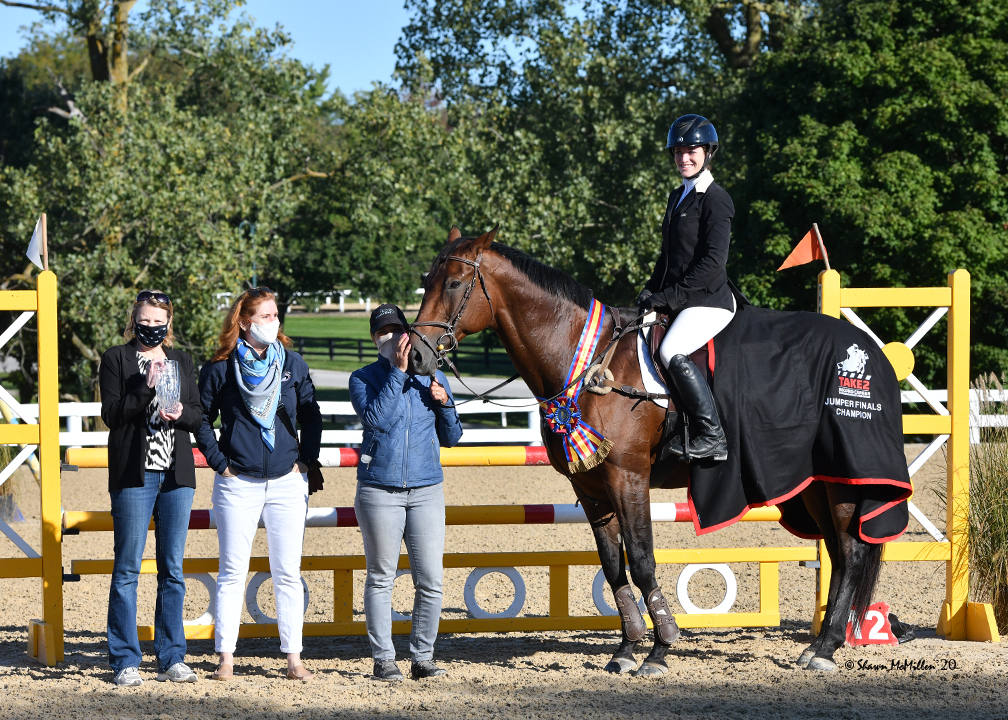 “I’ve learned a lot of patience from Satin, that’s the biggest thing,” she explained. “When I first got her, you couldn’t touch her, you couldn’t go near her head. Even now, she really doesn’t let anyone else touch her. But when I’m there, with the vet or the blacksmith, she is so much better behaved. She trusts me to do what’s best for her. She knows I will never put her in harm’s way.”

“I taught her to have confidence,” Alexa said. “She will jump anything. She doesn’t stop and she doesn’t spook (knock on wood!). When she is in the arena, she has that attitude – ‘look at me, I’m awesome.’ When she walks out after she wins, she knows it, and she wants to be the center of attention. She’s definitely a queen.”

Satin embodies the best qualities of the Thoroughbred.

“Thoroughbreds are amazing animals,” Alexa said. “People try to label them, that they can only do so much, that they need so much maintenance. Wrong. Thoroughbreds can do anything. I love their heart, their passion and their drive, I love how much they want to give back and please their owner. I want people to know that, I want to spread the word.”

Alexa believes that the TAKE2 Program is doing just that.

“I love what TAKE2 is doing for racehorses, for Thoroughbreds,” she said. “TAKE2 is getting the word out about just what Thoroughbreds are capable of doing. They have so much more to give when their racing careers are over. And I am hearing it more and more – people find out about these classes, they see the money you can win and the fun you can have and they say, ‘I need to get a Thoroughbred, I need to get a horse off the track and do this.’ There’s an excitement to being part of the TAKE2 Program, and the word is getting out there. I love that.”

TAKE2 President Rick Schosberg added, “We are thrilled to see horses like Satins Angel succeed in our program, because they put the spotlight on the mission of TAKE2. We want to promote the work of Thoroughbred Aftercare Alliance-accredited organizations affiliated with racetracks around the country that provide a safety net so that what happened to Satins Angel will not happen to other horses. We want all our horses to have happy and healthy lives when they leave the track.” 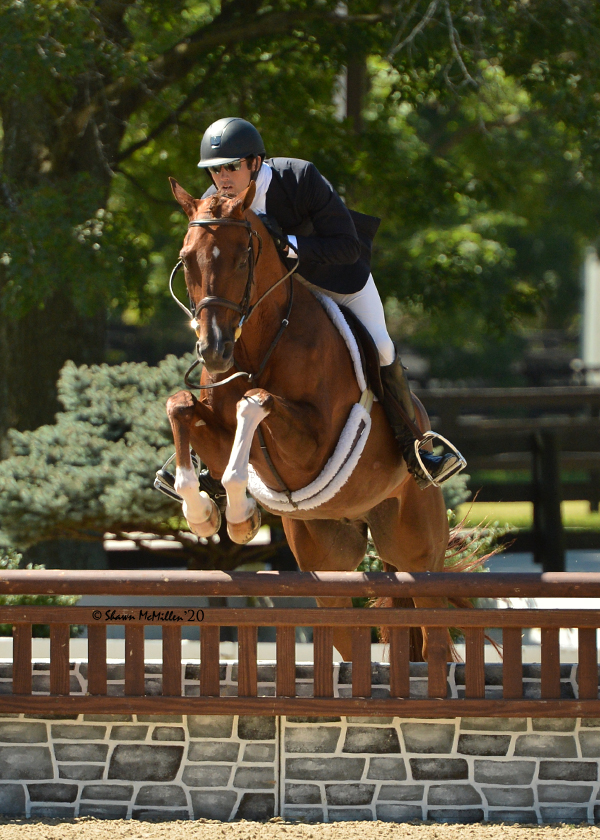 Polly Lampshire’s Lucca showed off his remarkable consistency to once again take the champion’s sash in the 2020 TAKE2 Hunter Finals. Tess Fortune’s MVP was second for the second straight year, with TAKE2 Junior Rider champion Jenna Drago and Irascibull rounding out the top three.

Lucca was also a champion in the TAKE2 Hunters at the Winter Equestrian Festival and at NCHJA Annual earlier this year for trainers Ron Danta and Danny Robertshaw and 26-year-old rider Hunter Kay.

“We, [husband] Nick and I, are absolutely thrilled with Lucca’s accomplishment!” said Polly. “Nick named him for Lucca, Italy, because he felt he was so classic. It is such a good feeling to be able to promote Thoroughbreds as we believe in them so much. As you know, it takes a village, and we couldn’t have done this without Danny and Ron, Hunter and the people who, behind the scenes, help make Lucca shine. We have been so grateful to have found this wonderful animal. Thank you to TAKE2 for giving us this opportunity.”

Hunter has been riding Lucca for seven years, and has learned how to get the best out of his partner in the ring.

“He can be sweet, but he is also very opinionated,” he offered. “He lets you know when he is happy, and when he doesn’t like what you’re telling him to do. You have to work with him, not against him.”

He added, “I do enjoy riding Thoroughbreds. They can be very competitive in both the hunter and jumper divisions. Thoroughbreds tend to come along quicker, they learn more quickly than the Warmbloods. I hope they can continue to make a comeback, and I think TAKE2 is doing a great job to make that happen. The prize money is encouragement to participate, and the TAKE2 classes are offered at more and more horse shows every year, giving more people the chance to get involved.”