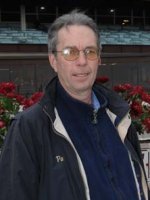 After graduating with a Bachelor’s Degree in Business Administration from the University of Miami in 1970, Pat promptly went to work for his father, Hall of Fame trainer Tommy “T. J.” Kelly. He started his own public stable in 1977.

Pat has been actively involved in horsemen’s issues for many years. He has been a member of the New York Jockey Injury Compensation Fund and has served as a trainer representative on pension funds for Backstretch workers for over a decade. He is also on the Board of the TAKE2 Second Career Thoroughbred Program. Further, Pat previously served as long-time Vice President of the New York Thoroughbred Horsemen’s Association.

Pat has won numerous New York and graded stakes races. Among his career highlights was Evening Attire being presented with the Secretariat Award as the top New York horse by the New York Turf Writers Association in 2002. Evening Attire won the Jockey Club Gold Cup that year.