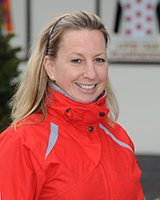 Trainer Leah Gyarmati grew up in Forest Hills, NY, and developed a love of horses at an early age. She started riding at the age of eight and rode show jumpers as a teenager before heading to the racetrack for a summer job as an exercise rider for Hall of Famer Allen Jerkens. That “summer job” quickly turned into full-time employment; Gyarmati worked for Jerkens from 1981 until 1988, then decided to take a hiatus from the horses to pursue her education.

Enrolled in Alabama’s Samford University, Gyarmati studied philosophy and theology, earning a Master’s Degree in Theological Studies that might have led to a career as a college professor. But, while working towards her Ph.D at Drew University in New Jersey, she returned to the track, and eventually chose to make her living as a trainer.

Gyarmati was working as an exercise rider and assistant trainer for Jerkens and his son Jimmy in the mid-‘90s when her mentor offered the opportunity to try her hand at riding races. That led to an 18-month stint as a jockey, but the horsewoman’s true calling was as a trainer. Gyarmati, who also worked for Jimmy Jerkens and Mike Hushion before going out on her own, saddled her first winner, Flippy Diane, in the 1999 Maryland Million Distaff at Laurel, and has since compiled more than 200 victories and purse earnings in excess of $11 million.

Gyarmati’s top runner to date is Sweet Reason, who captured the 2013 GI Spinaway S. and highlighted a career year for the conditioner when taking the GI Acorn S. and GI Test S. in 2014. She also sent out Noble Moon to take the GII Jerome S., and Wonder Gal to run second in the GI Frizette S. and third in the GII Adirondack S. and the GI Breeders’ Cup Juvenile Fillies during the season.

Gyarmati was running for the NYTHA Board for the first time when elected in 2014. A resident of Floral Park, NY, and on the NYRA circuit year-round, she has a 26-year-old daughter, Rachel, who works for the Belmont Child Care Association. Her duties include working on the BCCA website and fundraising.